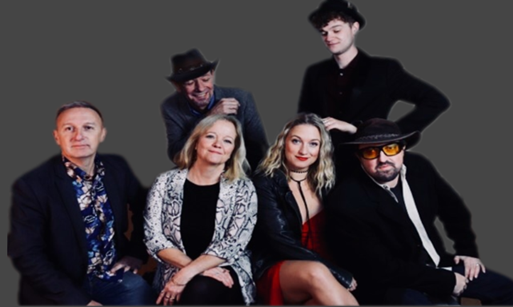 The six piece band have already had a top 4 record in the country charts in 2020, a nomination for UK Country Group of the year in the bag, and upwards of a quarter of a million streams and downloads to boot.
This latest offering is sure to see them scale further heights.

Although the group have been together for almost 2 years, they have spent the majority of that time tirelessly rocking the mainstream circuit of pubs and small festivals, packing in the crowds for whom Country music is either an undiscovered delight, or a guilty pleasure.
For the Leicester-based band of troubadours, ‘It’s All Right Here’ is a new high-water mark in the craft of song-writing, arrangement and production.

South African-born lead vocalist Sam Hobson is joined by songwriter Adrian Causier on singing duties on this outing, and the irresistible soaring harmonies and melancholy steel guitar, at once, hint at both exuberance and sadness, as the song tells of moving on from past pain and frustration, to a place where all the ingredients for fulfilment, are truly already within.

The Heartland Roots Band are at the vanguard of the new wave of British country-rock acts currently attracting attention on both sides of the Atlantic.

Formed in Leicester, England the six piece band play 'Heartland Rock', a genre which combines elements of country rock, folk, with other rootsy aspects such as blue-eyed soul and rhythm and blues.

Although musical and lyrical references are culled from a wealth of modern and classic country, the most common comparison that onlookers have commented upon is the apparent influence, both in instrumentation and use of layered vocal harmonies, of Fleetwood Mac. HRB have embraced this by cheekily throwing in the odd barnstorming rendition of ‘Go Your Own Way’ into the band’s legendarily blissful live performances!

The Heartland Roots Band self-released the EP ‘Back for More' before touring in Europe during 2018. In January 2019 the band signed to The Animal Farm label and their first three singles, 'Breaking Away’, 'Gasoline' and 'Hit Me Like A Freight Train' were released between August 2019 and February 2020.

Each new song has received airplay in the UK, Europe and the USA, and each track has also been streamed around 50,000 times.

The band's latest single, ‘Country Miles’ was released on May 31st 2020, and went straight into the top 5 of the iTunes Country chart.